Ever since I was a kid, I thought chickens looked like a lot of fun. In the 1980s and 1990s (first marriage), I tried to find a house with an acre or two, so that we could have a few chickens running around but it never unfolded that way. To satisfy my inner gardener, I tilled up big sections of the yard and had large gardens and took care of feral cats and planted lots of pretty flowers.

During my single years, I was so busy trying to keep body and soul together that I couldn’t afford a house, much less extra space for anything but me, and Daisy the Dog (my first Sheltie).

When “Backyard Chickens” came into vogue, I started reading up on them, and my friends gave me pictures of chickens, chicken magazines and even books on chickens. I really loved chickens.

And so it went, until this Spring. I thought, “Now is the time.”

In late March, I went into Alton’s Tractor Supply Store and bought a few of the cutest little chicks you ever did see. I bought ISA Browns, Black Sex Links and Golden Comets. It was such a happy day. Days earlier, I’d purchased all the accoutrements needed for their care, from baby food to warming lights. Everything was ready at home for the new babies.

After decades of reading up on this, I was ready.

Driving my little friends to their new home, I heard them squawking in their thin cardboard boxes, and I started to sing them hymns. Within seconds, they stopped fussing and became very still. For the next few weeks, I sang those little birdies many hymns, and that brought both me and the little chicks quite a bit of joy.

Back at the house, I spent many hours just sitting by their little “Chick Tub” watching them flit around. Every day, I held every chick and told her that she was “fearfully and wonderfully made,” or that “you’re a beautiful spiritual idea and a gift from the Creator.”

I set up remote cameras so that when I wasn’t home, I could log in and see how they were doing. It was never a disappointment.

As the birds grew, and “feather in,” their “kiddie corral” had to be cleaned a couple times each day. At first, I’d put on an N-95 mask, but I couldn’t tell if it helped or not. And then a few days later, I started feeling a bit unwell with sinus troubles. And then I broke out in hives. I didn’t know if it was bug bites or something else or maybe several somethings…

But the idea of giving up Mavis, Mable, Matilda, Beatrice, Chick Pea, Matilda, Vicious, Cogburn and the rest was unthinkable. I was in love.

So I started changing my clothes before and after cleaning the chickens’ pen, and scrubbing my hands after touching them, or anything near them, and I washed my sheets every day and sprinkled diatomaceous earth in their bedding, and under their wings and even under MY bed – just to be safe. Maybe I had mites. Or maybe it was fleas. Or – heaven forbid – lice. Every day, I washed my hair and vacuumed everything and I washed all of my clothes. I was the cleanest I’ve ever been in my lifetime. And the most exhausted.

My friend and I examined those little birds within an inch their lives. We never found a single bug. My friend, who’d been helping me, is in his 60s, and one day he told me, “I’ve been to the doctor because I’ve been sick, and it started with the chickens. And my blood pressure has gone way up. I think the stress is getting to both of us.”

And then the buffalo gnats arrived. Turns out, they can kill chickens.

The chickens were inundated. My friend and I bought a lot of vanilla extract, and carefully put a dollop of the anti-gnat elixir on each of their little furry heads. It didn’t help. So then we bought MORE vanilla extract, put it in a spray bottle and spritzed each chicken. Thoroughly. The gnats stopped swarming the birds…for two hours. It was awful. Next, I bought two massive fans for the pen, and had them running every day all day.

It still wasn’t enough. I had to put the chickens in their coop and lock them up.

And then came the rains, the mud, and when the sun hit the poop in that mud, the smell was unbelievable. And then the flies arrived. If you want to be thoroughly grossed out, google “Fly Strike.” It’s what happens when you don’t GIVE YOUR CHICKENS A BATH every month and/or they have runny poop. Fly Strike involves bird death via maggots via their vent (nice word for the orifice from which poop and eggs come forth).

That was my last straw. My dream was not working out. And sometimes, that happens in life.

After some thought, I realized that I needed to rehome my dear friends. Physically, I was miserable; my friend that was helping me was miserable, and I knew that I couldn’t do this on my own.

So after much thought and prayer, I found a lovely woman who owns a farm (and lots of chickens) to take in my little feathered friends. Truth is, I cried off and on for three days. Make that four. In the time it’s taken me to write this blog, I have shed a few more tears.

This weekend, we sold off the chicken run and the coop, for a fraction of their original cost. Disassembling all that stuff was unpleasant, as I’d expected it to remain in place for some time. But it didn’t work out that way.

In the end, I learned several hard truths about chicken keeping:

1) Health guidelines suggest that people over 60 should limit their exposure to chickens, because of the surfeit of diseases that feathered darlings might harbor. I dismissed that because I am hale and hearty. I do know that I grew weary of scrubbing my hands ALL THE TIME.

2) I learned that chickens, chicken feathers, chicken poop, and chicken bedding is a common allergen.

3) Bugs. Lots of bugs enjoy hanging onto chickens, such as fleas, mites, lice, gnats and flies. That’s one of the reasons that you need to scrub thoroughly after contact. Chickens do eat ticks and other bugs, but for me, the trade-off didn’t work.

4) The smell. My friend Jan had warned me about the smell, but I wasn’t prepared for how awful it really was. When the sun hit that poop, it was intense. Again, I’m not suited for this. I have a hypersensitive sense of smell, and it really got to me.

5) Chickens are a pooping machine. At least once a day, I would hold each bird in my hands and tell them about their unique relationship to God, and tell them how much they were loved. Unfortunately, by the end of each “lovely embrace,” I had poop on my hands, my shoes and sometimes, my clothes.

6) I’d read that chickens are a relatively low-maintenance critter and I don’t agree. Every day, I invested an inordinate amount of time doing SOMETHING with these chickens. Building fence, putting a wire ceiling on the fence, cleaning their coop, bagging up the pine shavings, cleaning the roosts, checking for bugs, checking their “vents” for bugs, buying food, cleaning food and water containers, cleaning me, and yelling at Teddy for drooling when she stared at the chickens. I’ve subsequently read that chickens are great “barnyard animals” because they eat scraps and dairy drippings and such, but as a penned-up animal in a suburban back yard – maybe not an ideal situation.

7) They are livestock. There is a risk of contracting some nasty diseases from chickens, and perhaps in my ciphering and ruminating, I diminished that hard truth. I should not have done that. They’re not domesticated animals. When I tell Teddy that I love her, she finds her favorite stuffed squirrel and drops it at my feet as if to say, “Playing is my love language. Now let’s play fetch.” In other words, she responds. And she knows the rules. You don’t bite Mother. You don’t poop in the house.

8) Chickens (and their eggs) attract snakes and rats. On this 1/2 lot, that seemed like a really bad idea for a lot of reasons. I’ve done battle with rats. They’re awful. And there are no simple ways to get rid of them. You can poison rats, but then there’s the risk that Teddy could eat one.

9) My beloved Teddy is almost 12 years old. That dog and I have been through so much, and she’s my priority. She didn’t like those chickens. When I held the chicks and sang them hymns, Teddy would literally whine and cry. She was jealous.

10) The work. While I absolutely loved these critters, the amount of labor involved proved too much. Hauling home big bags of pine shavings and feed and cleaning out the coop (and run) was too much. Cleaning dried bird poop off things was awful, and more than a time or two, some of that filth ricocheted back in my face.

Chickens, and their soft clucking sounds and their soulful eyes will always be dear to my heart, but there’s a big difference between enjoying something and needing to OWN that thing. From this point on, I will enjoy them with my whole heart, but I think my days of chicken farming are behind me.

And now, I need to get back to writing that book. 😀

Two years ago, my online friends suggested that farming might not be the best use of my remaining years. Thank you for telling me that. Turns out, you were right.

As always, please leave a comment. Thanks so much. 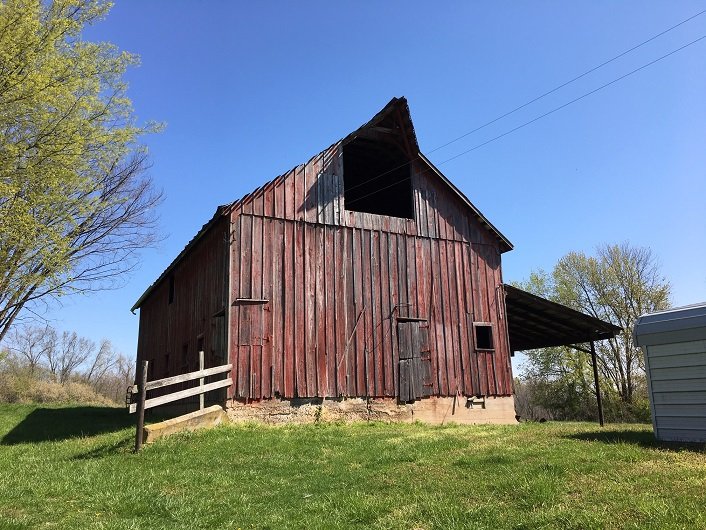 For most of my life, I thought that I wanted to live on a farm and take care of cute little critters. As my daughter says, “Mom, when you have skin like porcelain and you can see all your veins through it, and mosquito bites hurt for three days, odds are that you’re not built to be a farmer.” This is a farm in Elsah, IL. 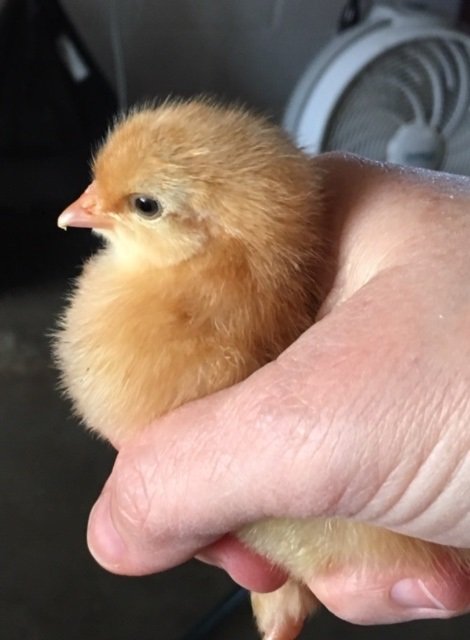 The chicks came into my life on March 31, and there are few things cuter in this world than a baby chick. This is a Golden Comet, known as “Matilda.” 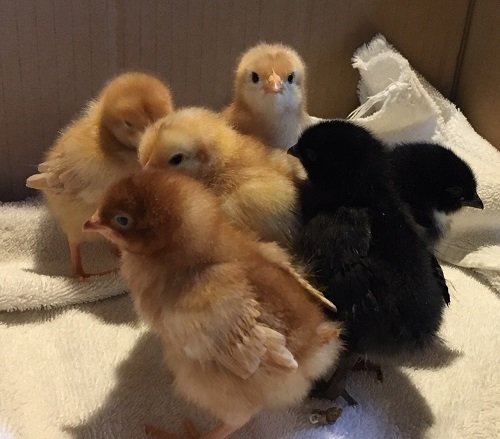 There’s always one in the crowd…I love this picture because it shows Mavis looking right at the camera – I think. These birds are so cute, but as soon as the feathers appeared, that’s when the trouble started. 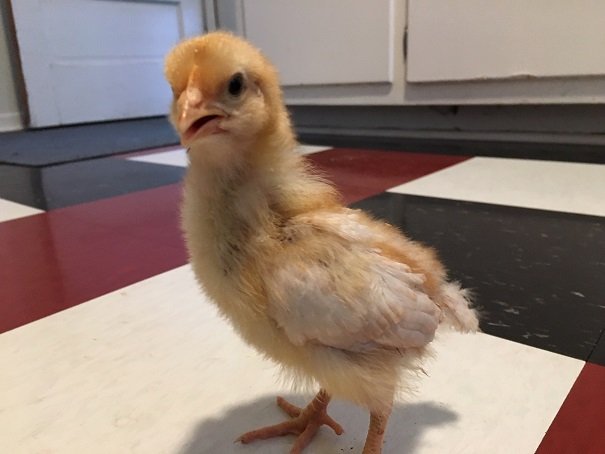 This is Mable, named for my beloved friend, Mable Pancake. And it’s also a cute little bird caught in mid chirp. 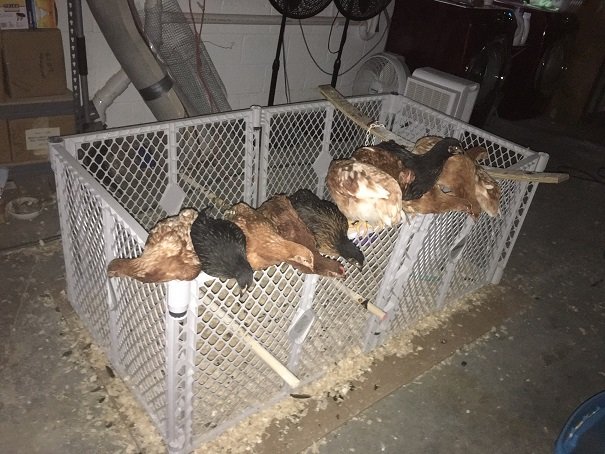 Chickens live 5-8 years, which means that they grow very fast. They were in this kiddie corral for a short time, and they got bored with it, so they started “roosting” on its edges.

We built a beautiful run for them (10×30) and it was predator proof in every direction. 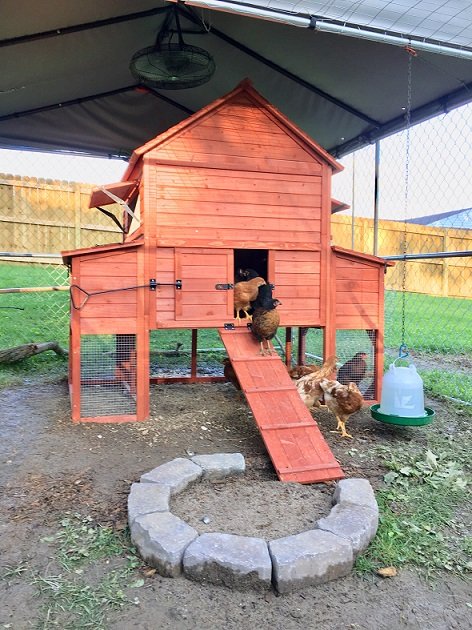 Their coop was beautiful (and expensive) and we looked forward to the day when we got our first eggs, but I think from now on, I’ll get my fresh eggs from the neighbors.