After my “temporary death experience” in September 2018, I realized that I’d been miserable since my idiot husband decided to commit suicide. After glimpsing heaven, I knew that I had to make some draconian changes, so I sold off everything in a big hurry (including my home) and hopped in my car and drove 1,000 miles west.

It was a good decision, but after I was settled here in the Midwest, I realized that I hadn’t said good-bye to some of the people that I respected, admired and loved, and one of those people was Mike Neal.

One of the greatest blessings in becoming involved in Ham Radio was meeting high-caliber, intriguing, and hyper-intelligent folks, such as Mike Neal.

When I was getting started in Ham Radio, Mike became my “elmer” and generously shared his vast and impressive knowledge of all things related to Amateur Radio. When I got a new gadget for the radio or an antenna, he’d come by and show me how to put it all together. For a time, we served as president and vice president in RASON (the local ham radio club) and I came to appreciate his quiet wisdom and gentle discernment even more.

Mike is mentioned by name in my Penniman book, because he was a tremendous help in identifying both buildings and materials in WW1-era photographs. Because of his expertise, several vexing questions were settled.

Mike was humble and soft-spoken, but I came to realize that he was also a historian’s best friend. He seemed to know a whole lot about 200 years of American military history. I was bedazzled.

Mike was one of those people that I should have stopped and visited with, before I tore out of town.

After The Bad Thing, so many people just vanished from my life. Many people blamed me for W’s death. Some people told others (never told me) that W would still be alive if he hadn’t married me. So many horrible lies and ugly rumors. And some people decided that my tragedy might be contagious, and just decided to no longer be associated with me.

Mike was one of the people that tried to keep me in his circle, but I was too damaged to accept his grace and his kindness and his support.

A day or so after The Bad Thing, Mike Neal stopped by my house while out running errands. He didn’t know what had happened. He saw Crystal out in the front yard and asked her, “Hey Crystal, what’s with all the cars?”

She said, “Mike, it’s Wayne. He came home for lunch on Monday and killed himself. The funeral is in a few days.”

I don’t remember much from that time but I do remember this: Crystal told me later that Mike collapsed backwards against his car as if he was going to faint. She said, “Mom, it was like someone had just stabbed him in the heart. The wind went right out of him and he stumbled, trying to get his footing.”

Crystal asked him if he wanted to come inside to speak to me, but he declined.

And yet, in the months ahead, despite his own declining health, Mike reached out to me several times. We had a few visits but I do so wish that I had stopped to say good-bye before I darted off to St. Louis.

Yesterday, I learned that Mike Neal went through that door on July 9th. He’s now living in that place which I only glimpsed. We’re all the poorer for losing such a remarkable man, but our loss really is heaven’s gain. 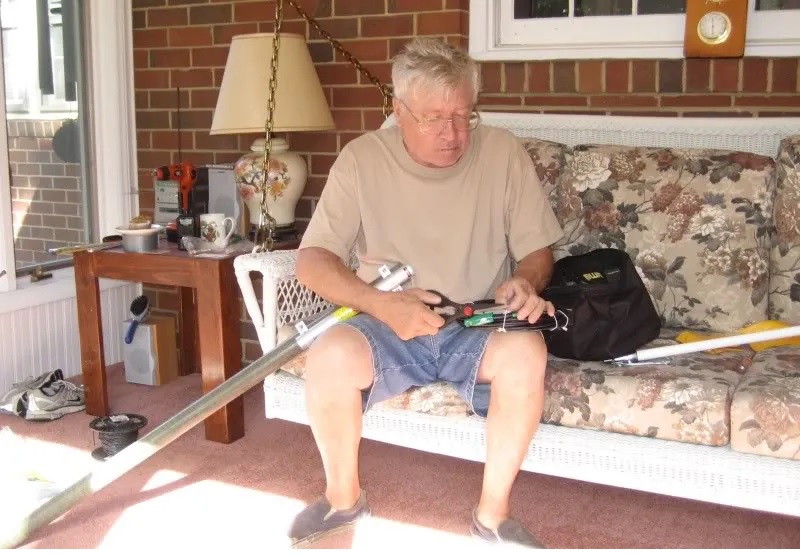 Mike Neal assembling a two-meter antenna on my sunporch in Norfolk, Virginia.