Some Days, The Heartache Won’t Leave You Alone…

For several days, I was euphoric about the new house. It was good. It was freeing. It was beautiful. It was PROGRESS!

And then a few sidewinders hit me.

On Tuesday, October 17, a local moving company moved many of my worldly possessions from the old rental in Portsmouth to my new home in Suffolk. On Wednesday (the very next day), the same company delivered about 50 large boxes from storage (from my old house in Norfolk) to the garage of my new home. Fortunately, it’s a very spacious garage. Unfortunately, October 18th was the 18 month anniversary of Wayne’s decision to commit suicide.

Opening up those boxes and revisiting my old life ripped a massive scab off my soul that is still trying to re-heal. Pawing through each and every item in those boxes – things that I’ve lived without for 18 months – was excruciating. Due to my emotional state, I did not participate much in the packing up of the old house in Norfolk, so every box was a surprise.

Several items caused me to abandon the garage and run to my bedroom where I collapsed and wept for a time. There were a few boxes that left me unable to return to the garage for the rest of the day.

As one small example: As I looked at the number of dusty old books I owned, I thought to myself, “No wonder he killed himself. Look at all these stupid used books. Who would want to live with someone who buys so many old books?”

To the unenlightened, that may seem like nonsense, but to my tired, terrified and grieving brain, it made perfect sense, and it was devastating.

And what’s worse is that the nightmares have returned. With a vengeance.

I’m so very tired of this struggle. I’ve read repeatedly that “second-year grief” can be worse than the first.

I do know this: Suicide really is a “death like no other.”

Yesterday, I had a short visit with a 76-year-old widow. Her husband died from a combination of old age and a few ancillary ailments. She talked a lot about the many shared, happy memories. She talked about his last words. She talked about how his death was, in some ways, a relief due to his advancing years and declining health.

I found myself absolutely envious. That was supposed to be my story. But it’s not.

Here’s the very best article I’ve ever seen on what it’s like to lose a spouse to suicide.

It has ten bullet points, and they’re all spot-on, but #6 described my life the best:Six (6) :

Your friends and family will find it difficult to believe that you (the man who committed suicide) did this without provocation. They will search for someone to blame. And that person will be your wife. They will whisper that she drove you to it. They will find it hard to be around her. She will have to survive this thing on her own.

I know that several people have told me that they’re glad “I’m better now” thanks to this lovely home of mine. It’s true, I’m better and I have some stability now, but not an hour goes by that I don’t struggle to keep moving forward.

There is no new normal. There’s just plodding along and hoping that eventually, the days will get easier and that my heart and my soul might one day find true and lasting peace.

The old “friends” are mostly gone, but a handful have remained and have shown their true mettle, and for that handful, I’m supremely grateful. And I’ve learned a lot about those folks: I’ve learned that they’re strong enough to stick around when the going gets tough. 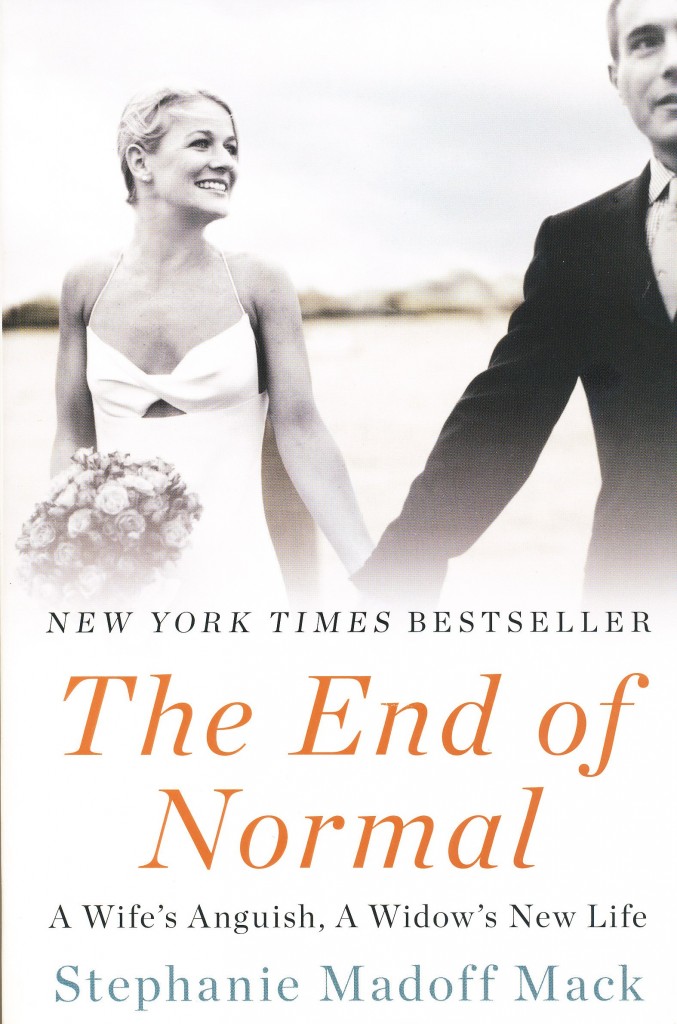 Mark Madoff was the son of Bernie Madoff. In 2010, he hung himself at the apartment that he shared with his wife, Stpehanie. I'm in the process of reading this book - a little bit at a time. I've had to skip over parts of it, because it's just too painful. Nonetheless, the title says it all.